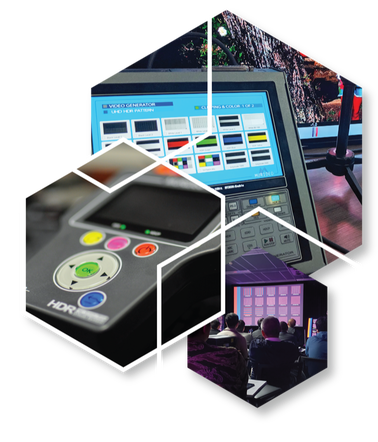 The true cost of these visually powerful advances is not simply the cost of new displays, it is updating infrastructure and mastering the new skills required to design, integrate, and test the HDMI signal paths that are required to bring these new features to our TV screens.

Since the release of HDMI 2.0 and the onset of 4K/HDR products and content, calibration has become secondary to successfully distributing the correct signal. Our mission at ISF is to deliver the best picture available to the end user and to match the director’s intent. It is paramount to the mission to get the complete and correct signal from the source through any repeaters in the HDMI network all the way to the display. Very few integrators have successfully taken the dive into distributing 4K with HDR because the signal exceeds the limitations of most of the current infrastructure in homes and businesses. CEDIA integrators have either put in systems with 4K and no HDR, limit the system to 1080P SDR, or they put the sources in the room with the HDR display. None of these compromises are necessary. We cover this at length to help you confidently sell and install these high bandwidth products and systems without the need for any shortcuts or compromises.

We are now seeing the second Golden Age of television. With more studios producing high-quality content, we are seeing inconsistencies between professional studio and broadcast monitors. The only way to ensure that the look of a TV show or film matches what the creators intended is to verify that all the monitors used for the project are using the same white point, and if not, calibrating all of them to the standard so they match. Current generation displays have shown us of the most dynamic, colorful, sharpest images we’ve ever seen. The best flat panels are capable of a near reference quality picture, and today’s projectors are dynamic and powerful. We are happily surprised to see TV’s and projectors at even entry and mid-level prices calibrating well and giving customers a good bang for the buck.

Coming out of ISF Level III, you will have the knowledge to teach customers about picture quality and be able to confidently explain why investing in a better TV or projector is worth it. This will all contribute to more margin and better sales, ultimately increasing the bottom line. All of this and more is covered in ISF Level III!
VIEW COURSE DATES/LOCATIONS
COURSE PREVIEW:
​Day 1: Understanding the basics of color science and communications through technology. This will lay the groundwork for the information you will learn over the next two class days.​

Day 2: What it takes to get high value (>14Gbps) signals to the display and AVR with hands-on lab using fiber optic termination techniques. We will also discuss in-depth use of matrices, splitters, Cleerline SSF, HDBaseT, and more.

Day 3: Understanding the video food chain, basic video system setup and ISF calibration. White balance, color gamut, and front panel controls all with hands-on labs using meters and generators.
WHY SHOULD I ATTEND?
WHO SHOULD ATTEND?
WHAT DO I EARN? (CERTIFICATION DETAILS)
REGISTER FOR AN ISF COURSE NOW
YOUR ISF INSTRUCTOR: JOEL SILVER

Joel Silver accepting the 2018 CEDIA Lifetime Achievement Award
Joel Silver is the President and founder of the Imaging Science Foundation, Inc., which was incorporated in 1994 to introduce video image quality calibration services into consumer electronics.  He volunteers as the chair of the CEA and CEDIA committee on Home Theater Video recommended practices.  He also is the producer of the HDTV Calibration Wizard DVD.  His work on advancing HDTV image quality was covered in the NY Times, the LA Times, Popular Mechanics, Wired and numerous A/V publications here and abroad.  He has run research projects for the California Energy Commission documenting how video calibration produces significant energy savings, as well as consulting for high-end video, high-end audio, telemedicine, medical management, Microsoft Media Center Edition PCs and the Venture Capital and Entrepreneurship program at the W. Averill Harriman School of Management.

Joel Silver is a co-inventor of the patented Microsoft Media Center Calibration Wizard which is now in over 111,000,000 PCs.
REGISTER FOR AN ISF CLASS NOW